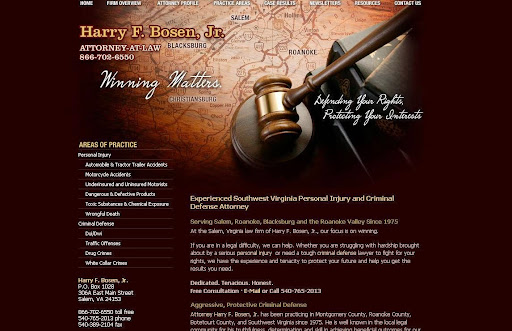 My daughter was going back to Radford after Easter last year (2010) and, running late, was going way too fast through that awful speed-trap zone on I-81 at Salem (i forget the exact speed). I could have paid the fine but was worried about the insurance consequences for a speeding conviction. I contacted Mr. Bosen, spoke with him by phone and he expressed confidence to me that he could get the charge reduced to a non-moving violation. Plus, he indicated it would not even be necessary for us to appear in court--he would handle the court appearance. On the court date, I received an email from Mr. Bosen advising me that the speed charge had been reduced to "defective equipment" and he provided instructions for paying the fine on line to the court. Over all, I was very satisfied with the outcome and the service provided by Mr. Bosen and his staff. He did exactly what he said he would do. I would definitely call him again. -- Bob Allen

My son Michael received a speeding ticket in Botetourt County Virginia going 91 in a 75. Unbeknownst to him, this was a class one misdemeanor. Very scary. We found Harry Bosen online, LUCKY CHOICE, and hired him to defend Michael in court on 6/7/17. Mr. Bosen told Michael exactly what he needed to do prior to the court date to prepare for his defense. His suggestions were spot on! Michael walked into the court room with Mr. Bosen, who was highly respected by the court, and with his resume of suggestions by Mr. Bosen as well as great council, Michael avoided any fines, suspensions or jail time. I would highly recommend Mr. Bosen as well as taking all his suggestions and following them through. He knows what needs to be done and obviously has a reputation for his successes!! Thank you!

After receiving a speeding ticket in Botetourt County, VA on the I-81S in July of 2014, I Googled Lawyers in that area and felt satisfied with the reviews for the Harry Bosen Jr. Law Firm. I made contact and they accepted my case with Mr. Matt Pollard being directly assigned. As of March 11, 2015 the case has been settled very favorably with no points to my license and minimal court costs. Mr. Pollard responded quickly to emails and provided accurate and reliable information as well as guidance. My immediate and faithful response to his guidance did no harm to the process. The fees were very reasonable and even more so when compared to fees for similar services in New York City. I wholeheartedly endorse and recommend this Legal firm to anyone who might need similar service.

Absolutely wonderful! Harry Bosen Jr. was fantastic from start to finish- putting me at ease when I called to inquire about services and informing me about the process. Since I got a ticket outside of my home state, he was able to represent me in court and kept me up to date with all information that I needed to know. He was fantastic at communication, and clearly outlined the information that I needed to send him. He was able to get my ticket dismissed, and for that I am truly grateful! I would recommend Harry Bosen Jr. 10 times out of 10!

What can I say about Mr. Bosen and the extent to which his assistance helped me? All I can say is that his service was beyond my wildest dreams. Upon contacting him, he apprised me of the situation, laid out what he could do, and assured me that he would work his hardest to achieve an acceptable solution for me. I am beyond satisfied with his service and would not hesitate to enlist his aid in the future. I highly recommend Mr. Bosen and his firm to anyone needing help with moving violations in the Commonwealth of Virginia.

I was charged with a reckless driving ticket in Botetourt county. I live in NJ and was unaware of the charges I was facing. I called Mr. Bosen a week before my trial, and he was able to reduce my charge to a speeding ticket and keep me from having to drive 10 hours into court. I was very happy with his services and timely response. I highly recommend Mr Bosen!

I had speeding ticket for reckless driving in Virginia hired a lawyer who could not be of much help.For second hearing was careful to hire a new lawyer and found Attorney Harry Law firm.Attorney Harry was more than helpful to get best solution. His Law firm was always clear in communicating and answering all questions completely satisfied with their services.

I received a speeding ticket almost close to reckless driving. For a week I was unknown what to do. My mind struck to researching on google and found Mr Bosen, called him and his advice. Today, after a month I last contacted him, I realized that I found the right man to handle the case. I recommend everyone in such case to use his service without hesitation.

Mr. Bosen was very polite and professional. He helped steer me through the Roanoke County Courthouse with efficiency and speed. My charge was favorably reduced and I could not have been more pleased with the outcome, particularly avoiding the Driver Improvement Program, which is an incredible waste of a valuable Saturday. Thanks you Mr. Bosen!!

Mr. Bosen helped make an overly stressful situation a smooth and surprisingly favorable endeavor. His practices go above and beyond the standard. He was constantly in correspondence with me and generous with his advice. The best choice by anyone who finds themselves in a sticky situation behind the wheel. If you are near him, seek his advice!

Was very pleased with the way in which our case was handled. Mr.Bosen has decades of experience in law and he was great to work with. He truly cares about the client and the outcome. We were always given prompt feedback of new developments via email and/and or telephone with guidance/recommendations.

I highly recommend Mr. Harry Bosen for an attorney. He is great! I was unable to appear in court as I was out of the country. Mr. Bosen appeared in court for me and was able to help me get "no points" on my license and a reduced charge. Call him should you ever need a great lawyer. Thank you sir.

Everybody dislikes Lawyers...... until you need one. When you get a good one & he or she comes through for you........you suddenly LOVE lawyers again !! Mr. Bosen is one of those GOOD lawyers ! He did a great job for us & got us the results we wanted. Highly recommended!!

When I was 18, I got nailed on I-81 around Salem or Roanoke County for speeding, driving on a suspended license, and no insurance. Mr. Bosen got me out of everything - all charges dropped! No jail time, no convictions on my record, no points, no fines!

I was caught in the same speed trap mentioned in the other reviews. My license were to be suspended for 30 days! Mr Bosen got it reduced to 9mph above which kept me from license suspension and kept the points off my insurance. Thanks so much!

“A big thank you to Mr. Bosen and your office for the time you put into my case. I cannot be happier with the results! I will keep you in mind if I ever need your services again, and will definitely refer everyone to you! Have a great day!”

If you are in a tough spot and you need a lawyer to help you, I would highly recommend Harry Bosen. He worked with me, kept in touch with me, and got the the best possible outcome in my case. I would make him my first option for anything.

My mom had a procedure at a local hospital that left her with permanent damage. Attorney Bosen was able to help us reach a satisfactory settlement without having to have a court hearing. THANKS!

Harry has never let me down!