Mr. Mayberry defended me in a third degree felony charge with a prosecutor that did not want to negotiate down at all. After multiple attempts to try and get me into a pretrial intervention program with no avail we headed for trial. His persistence in my case finally paid off. As I sat in front of the court house room waiting on Mr. Mayberry to show up I heard a loud conversation in the court room. I started to panic as the time got closer and closer to my trial time. 5 minutes before my court hearing out of the court room came Mr. Mayberry actually sweating with a smile on his face. The whole time I was panicking thinking that he would not show up on time he was in the court room early fighting to keep me out of jail and was actually able to convince the prosecutor to allow me into the pretrial intervention program. It was him I heard loudly fighting for me in the court room. I was so amazed and thankful that he was that dedicated to my case! He treated me the whole time with dignity and respect and always answered my phone calls no matter how many times I called. After my completion of the pretrial intervention program, I had to retain his service once again. Unfortunately I had to have a court order of return of property to receive my personal belongings back from the state. One would think this would be another huge price to pay to a lawyer in order to do this. Once again Mr. Mayberry showed his true character. He filed all the necessary paperwork on my behalf and walked me through the process like he was my friend and not my lawyer. Never once did he mention how much I would need to pay him for his services. After having the court ordered return of property completed and accepted by the judge we left the court room. Previously asking numerous times, I once again asked how much I owed him. His response was you already paid me enough from the first time I represented you. (When would you think you would ever meet a lawyer that would not want to drain every nickel out of your pocket?) I am not stating that he may do this for everyone as every case is different, however I bring this up to show the honesty, integrity, and true values this man continues to show every day to his clients. It is my honor to say that Mr. Mayberry and his firm is a top notch one of a kind firm. You should feel honored if he accepts your case, and the peace of mind knowing that someone like him is fighting for your best interest. Respectfully, Adam

Having never been arrested before I was completely terrified and ignorant to the judicial process. Jason provided emotional support and the knowledge and experience I needed. He was available 24/7 for all of my concerns and questions. He was efficient, comforting, and extremely intelligent. I had nothing but confidence in him from my first conversation --- and he made himself available the very first day I called for a free consultation. Jason is an Attorney you want on your team. The fact that he actually cares about you as person makes a scary experience a little less difficult. He goes above and beyond! With all sincerity, I am writing this review with the hope that anyone who finds themselves in need of a Criminal Attorney that they are fortunate enough to have Jason represent them. I am NOT writing this review just because he successfully represented me. But, moreso, to help others find a terrific Attorney.

Mr. Mayberry is a talented and skillful criminal attorney. He is recognized by attorneys as a hard fighter, and will do a good job for you. He is very active with attorneys around the country in sharing legal information, and I highly recommend him to you. Laurie Robbins Robbins & Associates Atlanta, Ga.

I hired Jason Mayberry to help with my case and he and his staff did a phenomenal job! Quick, effective both via email and phone. I can/t express enough how satisfied and happy I am with his service and the results that he managed to get for me! Thanks so much again Jason!

Jason Mayberry is a very professional lawyer that handled my case in court with no problems, in fact he had it thrown out. If your looking for a good lawyer you just found one. Highly recommend!!!

Jason Mayberry proved himself to be a very capable, professional, prompt and personable attorney. If you want competent representation make Mayberry Law Firm your first and last call

Jason is very professional yet relaxed. I always like working with him; he makes the work day better. I highly recommend!

Great guy all around, easy to speak to and very efficient. Handled my tickets as expected and I would recommend Jason.

Called for a free consultation and staff was more than friendly ! 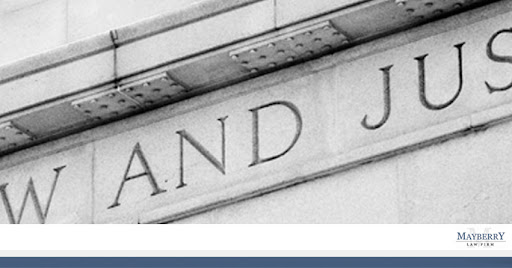